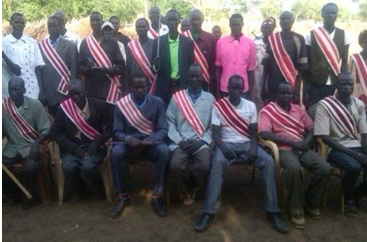 May 31, 2015 (Nyamilepedia) — Three weeks ago, an invitation notice was extended and circulated on media, urging sons and daughters of Pagak to attend the commemoration of Pagak promotion to County level which is said to would have taken place in June. One made a plan to attend the function. Unfortunately, on Monday May 25, 2015, cousin Chan Nyak Kuoth, drop me a line communicating the fact that the day celebration supposed to be held has been changed from June to May 27, that change ruined the plan. Although one haven’t made it to attend the celebration of the new county–Pagak, heart, thoughts and feelings are with the people who are physically celebrating. Insightfully, one thought about his paternal uncle who established the town using his own herds as the primary sources for use during that process. The author is also been mindful of all individuals who help in making the establishment of Pagak a reality over the years. Pagak County is located in the eastern-most of South Sudan along Ethiopian border. The area is the home of a variety speakers of Nilo-Saharan languages such as the Nuer and Burun/Majangir as well as their Anyuak brothers/sisters on the side of Ethiopia. The Nuer who live in Pagak County are eastern Jikany branch, consisting of Gaatjaak, Gaatguang and Gaatjiok. These clans are the majority of the Nuer who live in the Upper Nile region of South Sudan. When Pagak got established in 1988, Gaatjaak were only habitant. The complexity of the social composition of Pagak increased when the SPLM/A follow the citizen who explored the town and make it a training center for new army recruit in 1989—-that when other South Sudanese nationalities entered the area. Like many outer-posts, Pagak has for years—-remained a remote unreachable jungle village between Zarzar and Lare. Native dwellers who habited this would be the future business center—survive primarily on livestock, cultivation, fishery as well as hunting and gathering. Below is a succinct background story of Pagak, covering the period of its early establishment up to the moment.

How Pagak came of being? The story of Pagak date back to 1970s when late Vincent Kuany Latjor defected from Sudan in 1975 and slipped into the bushes of then Southern Sudan toward Ethiopia. He and his colleagues made contact with then Dergue regime of Mengistu Haile Mariam looking for military assistance. Out of the retaliation of what Sudanese government was doing by supplying Eritrean rebels, Ethiopian authority began to provide liability support and stationed mutineers in a remote camp called Bilpam. At first, Ethiopia did not provide their food item, which left the group struggled for their own survival. Initially, Kuany became close friend to this author’s paternal uncle who help them wholeheartedly using his own cattle.

In the fall of 1975, Kuany left Bilpam after the area was devastated with heavy flood and stationed in uncle Puok home in Lare. Approximately, he led a group of one to two thousand soldiers. Every week, uncle Puok has to slaughter an ox for them to eat throughout their stay, with the help of the community members, Kuany and his soldiers managed to stay in the community for a period of two months before they went back to Bilpam after Baro water went down.

When SPLM/A took over and Kuany was detained, uncle Puok got no recognition, given that those who took over did not know about his contribution. By the time Vincent Kuany got released in 1988 after SPLM/A cemented its unification with Anyanya-two, Kuany called uncle Puok to visit him in Itang. One remember Puok took two rams with him to Itang as a gift to Gat-Latjor. Before the end of the visitation, Kuany told Puok to go along with him to meet William Nyuon Bany. It was in that meeting Kuany declared to William Nyuon that, “during our eight years stay in Bilpam, part of our survival comes from this man. Since we have now had gotten plenty of ration from the United Nations, I want you to recognize this man for what he has done.” Then, William asked Puok what would he like to do? Puok told him “I would like to lead my community and establish a town that will serve as the seat of my authority.” Ultimately, William authorized a letter to be written bearing the seal of the SPLM/A. The tone of the letter directed whoever comes to have contact with uncle Puok to respect and comply with the content and the terms of the letter. Basically, the letter described Puok as the head chief of Lare. After Puok went back to Lare, he called general assembly meeting and the letter was read aloud by Hoth Nyamai Ruei who eventually became his secretary assisted by this author.

Shortly, within the fall of 1988, Puok and the group of sympathizers moved to Pilual Donnie, an area previously used as a refugee resettlement center during Anyanya-one era. Three months later, then governor of Gambella region Mr. Thowath Pal Chai, ordered the removal of the town from Pilual Donnie; saying, “Pilual is on the side of Ethiopia territory.” Then Puok relocated the town to Larping currently known as Pagak. The name Pagak is originated to a nearby village which previously occupied by Burun/Majanger before they vacated it in early 1980s and the use of the name Pagak was promoted by Dr. Riek Machar over the name Lerping. I bet he was in a mood of avoiding confusion between Lerping and his home town Leer. First, the establishment of the town was Vincent Kuany Latjor influence. Kuany was the one who encouraged uncle Puok to explore a town. In 1989-90, then Itang refugee camp coordinator comrade Taban Deng Gai promoted the residency of the town by ordering soldiers to build John Garang house. From that time onward, different personalities contributed one way or another to upgrade the town.

In late 1990s and early 2000, Dr. Riek Machar encouraged citizens anywhere in South Sudan to open airstrips so that commercial airplanes may drop food aid to needy local residents. Pagak became one of the chosen center where NGOs has stationed permanently to distribute urgently needed necessity. In 1995, an importance political development took place in Pagak, Dr. Riek came back to town from Addis Ababa after he had traveled to Addis Ababa seeking alliances with NDA after NDA form alliances with SPLM/A John Garang’s faction. When Riek’s quest for joining NDA was rejected and got ordered out of the country by the Ethiopian government, he cross the border and stationed in Pagak one of his headquarters and decided to form alliances with the NIF regime which later on resulted into the signing of a political charter with the government of the Sudan . Hence, the charter that culminated to Khartoum Peace Agreement and inked or signed on 21 April 1997 originated from Pagak deliberation. Currently, story repeat itself, the deliberation of adopting federal system as the form of the governance in South Sudan has again taken place in Pagak. These are historical facts children of Pagak should indubitably be proud of.

When CPA was signed in 2005, Southern Sudan interim government structured the system of governance by establishing five levels of the government i.e.; the country, State, County, Payam and Boma/Buma; Pagak ascended from being just a village to Payam. While the end of the interim period was approaching, many people in various places in South Sudan submitted proposals and grievances to power holders whether from State or National levels demanding more counties. Like others, Pagak citizens demanded that the town should be upgraded from Payam to county but all complaints did not workout. Such demands of creating more counties was put on hold until when the country was plunged to war and find itself in this current disorderly manner.

When Dr. Riek came to Addis Ababa from South Sudan in the first week of May 2014 following the European Union, United Nations and the United States’ pressure to involve high profile leaders in the stagnant peace talks in Addis Ababa Ethiopia, Riek brought with him the idea of adopting the federal system of the governance as the basis of ruling South Sudan once peace has prevailed and attained. Under that proposal, Dr. Riek has recommended that, “former southern Sudan districts under British-Egyptian rule, must be upgraded to State level” the idea had equally invited restructuring and promotion of more Payams to the county level. By the time peace talk broke down in October 2014, IGAD mediators demanded South Sudan warring parties must convene conferences in order to communicate IGAD proposal to their respected constituencies. Out of the SPLM/A-IO convention on December 6, 2015 Pagak and many other Payams were made counties after the function had endorsed Dr. Riek’s proposal of federation.

This past Wednesday on May 27, 2015, sons and daughters of Pagak had converged in the town to celebrate the birth of the new county. It was a well-attended function where joyous participants euphorically sang and ululated. Profoundly, the transformation that is taking place in the political structure of South Sudan under the leadership of Dr. Riek Machar is pioneering given that it has introduced the principle of decentralization under federated units opposing Juba tendency of ruling the country under unitary State where power is vested on the hands of the few people. This well thought restructuring, has to be carried on if we are really aiming of fulfilling our forbearers’ popular demand of federalism since 1947.

In conclusion, one is so grateful to the leadership of the SPLM/A-IO for making much needed transformation of the country. Without doubt, majority of South Sudanese people are yearning for federalism to be adopted as the system of the governance. Federal system unlike the mere centralization Juba dragging its feet of promoting, is a constitutional arrangement in which the sovereignty of the nation is divided between the national, State, county and all local governments. Such arrangement provide stronger degree of autonomy to various levels of the government to fulfil citizens’ need. As the celebration has been concluded, one would lastly appeal to Pagak sons and daughters, to promote spirit of mutual understanding as they are running new county activities. It is now up to us to develop the town. Development does not only mean building bricks, cement or zinc houses. It involve everything including combination of mud, grass and tree houses. In that extend, one would like to urge the commissioner and all his council members to build (federal republic square, a large center for conferences and public guess house) with wood, grasses and mud; using our women league, youth as well as civil society of Pagak men group. Modern infrastructure institutions will follow once peace has been achieved. Moreover, one would equally urge compatriots in Pagak to avoid being rigid over the land issue. Give land to all NGOS that wish to establish their stay and all SPLM/A-IO various institutions particularly department of education and health, their work will one day remain Pagak future benefit. .Long live the leadership of the SPLM/A-IO, long live the dream of our fore fathers. May God bless Pagak!!

The author is a political commentator: he should be reach by simonlul2000@yahoo.com

11 comments for “The Celebration of the New Pagak County!”