A respond to “Its time for president Kiir to Show leadership or leave”, by Kuir e Garang 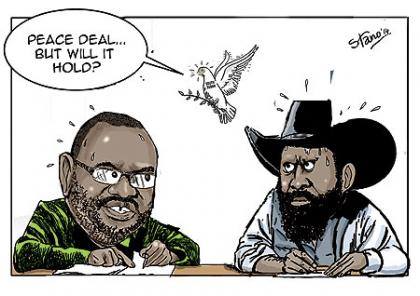 August 23, 2015(Nyamilepedia) — South Sudan’s war is not only fueled by those whom my brother Kuir e Garang referred to as Jieng Council of Traditional Leaders, but also, it is fueled by intellectual groups of certain individuals both at home and abroad. One may say that the current confusion created by them, the South Sudanese people, will be a long story to be brought to an end. I am not cursing, but I am making a reflection of what is taking place back home.

Regardless of where we come from, we all share the same fate. The nation perishes or survives as one.

On 20 August, or just to say two days ago, Kuir e Garang, a self-claimed political analyst wrote an article on the Southsudannation.com, titled: “It’s time for president Kiir to Show leadership or leave”. The article, in a cost of few seconds, drew a lot of attention compelling readers to drop thirty one comments, one may deserves to say instantly. Most of those who dropped their comment, for the most part, described the author as a nationalistic and a neutral figure in regards to the current ethnically motivated civil war.

However, in spite of the friendly comments-something I personally observed, it remain malicious whether the readers of Kuir’s article defined the basis on which Kuir used to blame and urge Kiir to refrain from bad conducts at the expense of Dr. Riek Machar. Kuir said in his article, “Blaming Riek Machar for everything is childish! Without any doubt, Riek Machar is a man who’s ready to die for the sake of leadership. He’s shown his own dictatorial mannerism: 1991-1994 and 2015!” Dr. Lam Akol, Dr. Peter Adwuok Nyaba, Major General Peter Gatdet Yaka and Major General Gatkuoth Gatoath Oathnyany are living witnesses of Riek’s one-man leadership. But Dr. Riek Machar is not the president of South Sudan” the man or Kuir went on.

As a matter of fact, what transpired Dr. Riek Machar to split from Dr John Garang in 1991 was not leadership greed from Riek Machar, nor the disagreement with Garang has anything to do with leadership. But instead it was the fate of the Southern Sudanese in the hand of the Muslim controlled government of Sudan which compelled Dr Machar to break files with Dr John.

Dr. John Garang wanted a unified and a revised Republic of Sudan while Dr. Riek Machar was advocating for an independent South Sudan and that was what the people of South Sudan has been expecting since the 1955 Torit mutiny.

Again, the defection of Dr Lam Akol from the SPLM/A-Nassir Faction cannot be used as justification to a false assumption of a mere dictatorial mannerism purported to be abused against Dr Riek Machar. Dr. Lam Akol has his own record as a multiple-defector, he defected from the SPLM-Main stream under the leadership of President Salva Kiir and formed the SPLM-for-Democratic Change in 2009, does this defection tells us Salva Kiir’s one-man leadership? Or it was Riek Machar who instigated the defection of Lam Akol in 2009? I wonder why we blame Kiir when we are the very people complicating the war instead of sensitizing our brothers and sisters of the fruitfulness of the nation when its unified and thereby enlightens youth to work for the national unity where nation building persist. We have to be transparent and that we blames others.

Too, the defection of Peter Gatdet Yaka from the SPLM-IO cannot be exploited and used to justify what Kuir calls “one-man” leadership of Dr Riek Machar. Machar on one hand was for peace, and Gatdet, on the other hand, was against. The question is, is it a mistake for Dr Machar to ward off the suffering of the people of South Sudan or it’s the right of Peter Gatdet to rebel against the peace and continue the war when it’s being fought at the expense of the people of South Sudan?

Furthermore, the sudden formation of the SPLM-In- Opposition in early 2014 subsequently after the Juba massacre was not a planned rebellion by Dr Riek Machar. Resistance against genocide and massacres compelled relatives of the victims to take up arms against President Salva Kiir.

We have to learn from the past. Kiir, if not the extra-ordinary efforts exerted by Dr Riek Machar, would have been rebelled in 2004 using a media propagation of what he called “conspiracy” by Garang and boys to arrest him. And if defections were to be used to justifies the one-man leadership of those who instigated defections, John Garang would have been regarded as a dictator in regards to 1991 Nassir declaration and to 2004 Kiir’s brief defection.

If there were to be a unified South Sudan, people from all the corners of the country, regardless of what their tribes is must seeks to enforce unity in the society. For me, and I am sorry to say so, we, the South Sudanese are against creativity, against progress and against any language that seeks common ground in our society.

Lastly, what Kuir e Garang must bear in mind, whether he like it or not, is that General Gatdet Yaka has not defected. The energies and too much time and in any case too much resources wasted by agents of Kiir in pursuing General Gatdet to break ranks with Dr Machar has finally failed. Do not dream of “a Peter Gatdet” returning to Juba before Kiir could ink peace any more, believe me, he and a group of elders are soon going to Pagak, and probably, maybe on Monday, the 31 of August.

1 comment for “A Response To Kuir e Garang: Why Blaming Salva Kiir At The Expense of Dr Machar?”